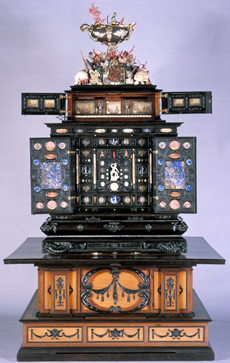 The eighth wonder of the world?

”Some consider it to be the eighth wonder of the world” wrote creator Philipp Hainhofer (1578-1647) about the Art Cabinet when it was handed over as a gift to the Swedish king Gustavus Adolphus (Gustav II Adolf) following his march into the town of Augsburg on the 24th of April 1632. The claim could be brushed aside as an expression of hubris, but the fact is that the Augsburg Art Cabinet has fascinated the world ever since its completion. Today it is the University's most valued objet d’art. But what is it that makes the cabinet so special and unique?

A unique cabinet with a unique collection of objects

The University’s Art Cabinet is the only one of Hainhofer’s cabinets manufactured in Augsburg during the first half of the 17th century with its collection of objects still intact. Up to a thousand objects have been preserved, and a large number of them are on display in the exhibition. This provides visitors with a unique opportunity to journey into the early 17th century world of pictures and objects. The Cabinet can be seen as a symbol of its days’ culture and education, interests and search for knowledge. The Cabinet and its contents are at the same time an expression of princely fashion - in Art Cabinets and Art Chambers, royalty and aristocracy collected art and objects of different types which were a manifestation of their culture, education and wealth. The desire for discovery and joy of collecting characterise this period, and this is reflected in the Art Cabinet and its collections.

The Cabinet - 240 cm high and 120 cm wide - has an ebony veneer for the most part. The upper part of the Cabinet, corpus, rests upon an under section of drawers and compartments and can be rotated with the assistance of a kind of ball bearing. This allowed people to comfortably sit back in an armchair and watch while the Cabinet rotated. There is a drawer that can be turned into a step ladder, making it easier to get to the top part of the Cabinet. The many objects could be studied at the fold-out table in the under section. There was a small cushion to rest one’s arm if the work became tiring!

The Seychelles nut – the jewel in the crown

They Cabinet has been crowned by a ”mountain” formed out of material from the animal and mineral kingdom. On top of the mountain sits an exotic - by the standards of the day - and particularly exclusive Seychelles nut. This constitutes the cup - the bowl shaped section – of a drinking cup encased in gilded silver. The cup is held up by the sea God Neptune. Drawers and doors are adorned with paintings, bronze reliefs, linlays of silver and inlays of stone following pietre dure-techniques. High up on the upper section rests a virginal, a keyboard instrument with an automatic musical mechanism. 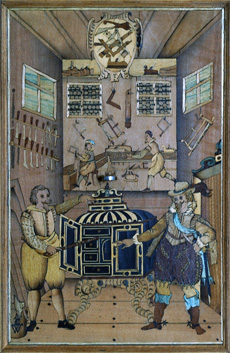 The collector, tradesman and diplomat Philipp Hainhofer is the creator - if not the manufacturer - of the Art Cabinets manufactured in the town of Augsburg during the first half of the 17th century. As the travelled and educated man he was he possessed the knowledge needed for piecing together the cabinets iconography, for planning the object collections and organising the many categories of handicraft needed for manufacture - everything from ebony workers and goldsmiths to instrument makers, glassblowers and watchmakers. At that time Augsburg was an important centre of handicraft in the south of Germany and it is commonly said that there were more goldsmiths than bakers in the town.

Gustav II Adolf died only a few months after receiving his exclusive gift from the Protestant councillors at Augsburg. The Cabinet arrived after a hazardous journey to Sweden in 1633 and was placed at Svartsjö Castle at Färingsö outside of Stockholm. A carpenter from Augsburg travelled with the Cabinet and maintained it and guarded it until his death in 1651. Around 1650 the Cabinet was moved from Svartsjö to Uppsala Castle. In 1694 it was donated by Karl XI to Uppsala University. It was then moved from Uppsala Castle to the University main building of that time - Gustavianum. When the new University building was ready in 1887, the Cabinet was placed in the Chancellory.