Objects from Egypt’s prehistory have been in the possession of Uppsala University since the 17th century, when, according to the French traveller Aubry de la Motraye, an Egyptian mummy was on display. This object’s later fate is unknown.

There is also a small ushabti (funerary figurine) made in Egyptian faience from around 600 BC. It came to the University as one of many amazing items in the Augsburg Art Cabinet and is one of the earliest confirmed Ancient Egyptian object in Northern Europe.

In the late 19th century, Crown Princess Victoria (1862-1930) donated a well-preserved mummy, as well as a wooden sarcophagus belonging to the priestess Tau-her, to Uppsala University.

The Nubian Collection of the Joint Nordic Expedition

Welcome to the Joint Nordic Expedition’s collection of Nubian antiquities!

The permanent Nubian exhibition is in Gustavianum at Uppsala University, on the first floor, together with items from the Victoria Museum for Egyptian Prehistory.

Nubia lies between the Nile's first and fourth cataracts and is as large as Sweden. It has a distinctive culture and its own language. The villages lie beside the life-giving river, beyond which the desert dominates.

The Aswan High Dam was built in the 1960s. The northern part of Nubia (500 km along the river) then disappeared under the water and the population was forced to move. Most Nubians now live in the south of the country as subsistence farmers, though many men work abroad.

Nubia has always formed an important link between the different parts of north-eastern Africa.

The Joint Nordic Expedition to Nubia 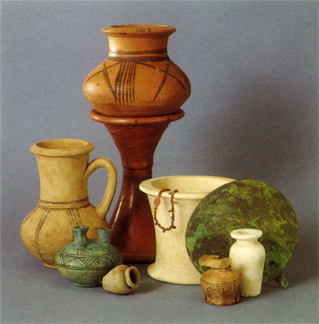 UNESCO conducted an international campaign during the 1960s to save Nubian art treasures and ancient monuments, in particular the temples at Abu Simbel and Philae.

As part of this project, Nordic archeologists investigated the region around Wadi Halfa in northern Sudan (1961-64). Finland, Denmark, Norway and Sweden financed the project under the leadership of Uppsala professor Torgny Säve-Söderbergh. Sudan gave many of the finds to the participating countries - much of the Nubian collection, as well as all of the documentation, is now cared for by Uppsala University.

More information about this can be found in Torgny Säve-Söderbergh’s article International Salvage Archaeology. Some organizational and technical aspects, in: Annales Academiæ Regiæ Scientiarum Upsaliensis 15-16 (1971-72), s. 116-140.

The finest and most interesting items from the collections belonging to the Victoria Museum of Egyptian Prehistory may be seen in the exhibition 'The Mediterranean Sea and the Gulf of the Nile', on the first floor of Gustavianum.

Gustavianum, which now houses Uppsala University Museum, was built at the beginning of the 1620s to be the University's principal building and was used for teaching right up until 1996, when the institutions then housed in the building (including the Victoria Museum) were moved out to enable an internal restoration to be carried out. The Victoria Museum has now been reinstated in Uppsala University's oldest standing building and has been on public show since spring 1998.

The current exhibition is organized chronologically from prehistoric times up until the early Christian period, and focuses particularly on themes such as life after death, the origin of writing and the Ancient Egyptian gods. The exhibition contains not only spectacular items such as painted sarchophogi and wrapped mummies, but also more everyday items such as ceramics and other household items. The displays are designed to meet the needs not only of members of the public who may be interested in art or science, but also to serve students and professionals within disciplines such as Egyptology and archaeology. Welcome to the Victoria Museum of Egyptian Prehistory!