The Department of Mathematics has a collection of seventy three different mathematical models, made from a variety of materials: plaster, plastic, paper and wire. The majority of the items are of plaster and purchased from Germany in the late 19th century. 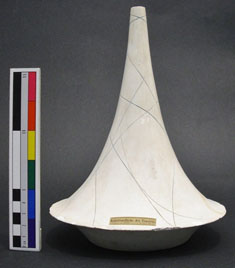 Several of the models retain their original labels, revealing that some were produced by a company called L. Brill, founded in 1880 by Ludwig Brill. His brother Alexander von Brill, who was a professor of mathematics at, among other places, the Technical High School in Munich, designed several models as early as the 1870s. Towards the end of this decade there was a great interest in producing and designing mathematical models.

Alexander von Brill worked with Felix Klein, who was a strong driving force in model development. The two men, together with their students, designed a large number of mathematical models that were then sold by companies such as Brill and Schilling. Klein also contributed significantly to making the models popular - he often promoted them at fairs, exhibitions and conferences. At the end of his life, he could proudly say that no German university was without a substantial collection of mathematical models.

The L. Brill company was bought in 1899 by Martin Schilling, who renamed it after his own name. There is at least one model in the collection with a Schilling label. Models without labels are difficult to identify. The plastic models were purchased in the 1980s to illustrate volume differences.

The Purpose of the Models 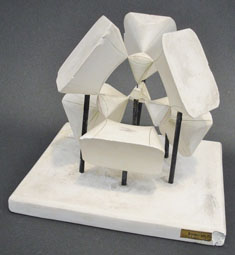 The models are designed to serve as educational tools in the teaching of mathematics by concretizing abstract mathematical formulas. However, it has proved difficult to find out how the models at the Department have been used. Have they really had the role of educational tools or have they been seen as objets d’art, placed on desks and in bookshelves? Their role may have changed over time, they may have been purchased as educational aids, but have become objets d’art. Today, their function can be seen as a combination of the above-mentioned proposals. There is uncertainty at the Department about whether or not the models were actually used for teaching. Some lecturers have shown interest in them, others not.