Only a few objects have survived to represent the activities of the Department of Sociology from its establishment in 1947 until the present day. The most remarkable item is a GSR (Galvanic Skin Response) device that was used to measure emotional reactions in research subjects.

The GSR device was ordered from the company C. H. Stoelting in Chicago in 1958 and delivered in 1959. The device now at the Department was saved by Professor Emeritus Jan Trost, who was the person who worked with it most. He used the device to investigate the reactions to stimuli words associated with negative or positive emotions. This research attracted a lot of media attention, but what is most remarkable is that the device still works. The GSR device includes a pair of dice with black and red crosses and a bottle of ink that was used to allow the device to record the respondent's response on paper.

There are also a number of needle cards with associated needles and hole punches. They were common in the 1950s and were used for statistical analyses. Around the edge of the cards are a number of small perforations that can correspond to different characteristics of a survey. If a property exists, the relevant hole is broken at the edge with the hole punch. Once all cards are prepared, they can be divided into different groups by sticking the needle through different holes and lifting the entire pile so that the cards that have some perforations broken fall down.

This process is then repeated for different properties. For large-volume surveys, hole cards processed in a hole card reader were more appropriate. Together with scorecards, the hole cards were submitted for processing to Uppsala Datacentral (UDAC), which opened in 1965. The hole cards are accompanied in the collection by three woven ties. The receptionist at UDAC demanded that those who created extra work for the staff by filing incorrect scorecards should buy a tie for five Swedish crowns as a penalty. These ties were woven by the receptionist's aunt in Dalarna. The objects all have something to say about both the history of the Department and the University and should therefore be preserved. 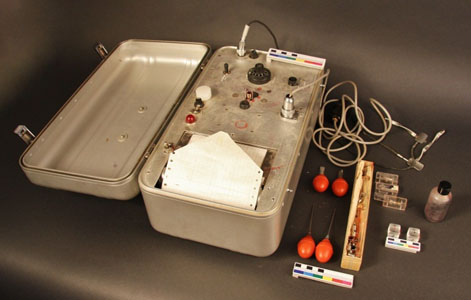